Evil crone of Berez and follower of Mother Night

Deceased Baba Lysaga has allies in Castle Ravenloft-a coven of witches. Through the aid of these witches, Lysaga recently uncovered a potential threat to Strahd: a secret society of wereravens calied the Keepers of the Feather, a group that uses ordinary ravens as their spies.

Ideal: “No love is greater than a mother’s love for her son.”
Bond: “I am the mother of Strahd. Anyone who disputes this fact can rot.”
Flaw: “I will not rest until the last of my son’s enemies are destroyed.”

Two women gave life to Strahd von Zarovich. The first was Queen Ravenovia van Roeyen, Strahd’s biological mother. The second was the queen’s midwife, a devout follower of Mother Night named Baba Lysaga. Although it was the former who raised Strahd and enabled him to follow in his father’s footsteps, it was the latter who sensed a potential for greatness and darkness in Strahd surpassing that of any other mortal. Lysaga believed then, as she believes now, that she is Strahd’s true mother.

When Strahd was still a baby in his crib, Baba Lysaga cast protective spells on him and crept into his nursery on stormy nights to sing magical rhymes to him. She also placed the “spark of magic” in him, ensuring that he would become a spellcaster. Baba Lysaga’s unhealthy attachment to the baby Strahd did not go unnoticed. After she received several disturbing reports, Queen Ravenovia was forced to banish the midwife from the kingdom. Lysaga never saw Strahd again, but she has succeeded in staying alive to witness the triumphs of her beloved boy, who, in her mind, is eternally blessed. Despite the horrors Strahd has wrought, Lysaga still envisions him as the perfect child she delivered into the world. Strahd is the only thing in her life that matters to her. During her exile, Baba Lysaga made countless sacrifces to Mother Night, pleading with the goddess to afflict Queen Ravenovia with ill health and visit death upon her. Lysaga eventually got her wish, and after Strahd settled in the valley of Barovia, Lysaga moved as close to him as she dared to. In the filth-ridden depths of her heart, Lysaga knows that Strahd would never accept her as his true mother, nor could she bear his rejection. As a result, she has never confronted him. She would rather exist in perpetual denial, whiling away the days, months, and years practicing fell magic and looking for ways to help her “son.” 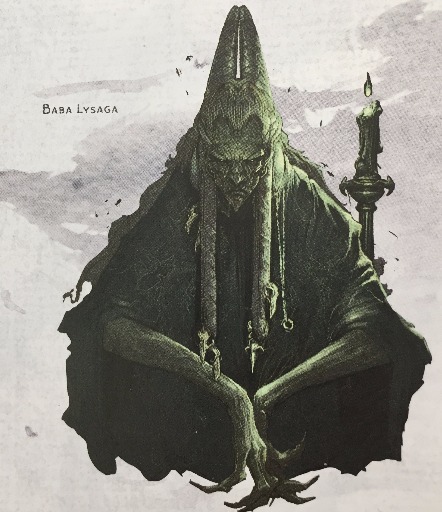