DECEASED – Lady Wachter is a Vallakian noblewoman, an influential and vastly wealthy figure. The PCs, on the secret order of the Baron, and in return for the release of Rudolph Van Richten, killed Lady Wachter and delivered her severed head in a bag to Baron Vargas Vallakovich.

Fiona seeks to supplant Baron Vallakovich as the town burgomaster — no one hates the burgomaster of Vallaki more than Lady Fiona Wachter, who is often quoted as saying, “I’d rather serve the devil than a madman.” She makes no secret of her family’s long-standing loyalty to the von Zarovich line. She believes that Strahd von Zarovich is no tyrant but, at worst, a negligent landlord. She would happily serve Strahd as burgomaster of Vallaki, but she knows that Baron Vargas Vallakovich won’t give up his birthright without a fight. Another secret of Fiona’s is that she sleeps with the corpse of her dead husband, Nikolai, who died of sick­ness nearly three years ago and whom Fiona cherished. She has kept his body in perfectly pristine condition since his death through the use of Gentle Repose spells on the corpse to keep it from deteriorating. She owns an old house in town but rarely leaves her estate. Her two adult sons, Nikolai and Karl, are local troublemakers. Lady Wachter also has a mad daughter, Stella, whom she keeps locked away. It is now known that the Baron’s son somehow drove her daughter mad, causing a personal vendetta to erupt between the two nobles. The burgomaster doesn’t confront Fiona or her offspring because he is personally afraid of Lady Wachter, whose family has old ties to Strahd.

Lady Wachter’s latest scheme to gain control of Vallaki is far more diabolical. She has started a cult based on devil worship and has written a manifesto that she reads to her “book club,” which is made up of the most fanatical group members. Inspired by her words, these zealots have created smaller cults of their own. 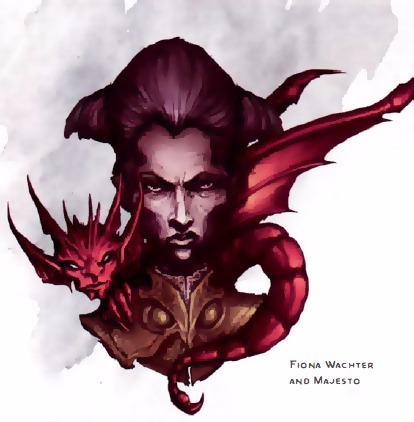