The Burgomaster of Vallaki's henchman and Captain of the Guard

Deceased - Izek has a history of violence as well as a fiendish deformity: a monstrous arm with which he can conjure fire. Fear of Izek keeps the baron’s enemies at bay. In addition to his weapons, Izek carries an iron ring of keys that unlock the stocks in the town square.

Izek and his sister were born in Vallaki. One morning, their father and their uncle took them fishing on Lake Zarovich. On the way back to town, a dire wolf attacked Izek and bit off his right arm. His father carried Izek back to town while his uncle distracted the beast. His sister ran and hid in the woods and was never seen again.

Unlike his sister, Izek was.born·without a soul. As time wore on, he forgot his lost sister and learned to cope with his disability. Izek’s parents succumbed to their grief, leaving him an orphan. He became a sociopath.

Other children ruthlessly mocked him him because of his dead family and his missing arm, but he was a large boy and had no trouble killing them and disposing of their bodies. He was eventually caught in the act and brought to the burgomaster. Instead of punishing the boy for his crimes, Baron Vargas Vallakovich pardoned Izek and took him into his home. Izek has been loyal to the burgomaster ever since, enjoying the power of his position and the comforts of his master’s mansion. When he isn’t enforcing the burgomaster’s will, Izek drinks copious amounts of wine.

After years of doing Baron Vallakovich’s dirty work, Izek awakened from a drunken stupor one morning to find that he had grown a new arm to replace the one he had lost. The new appendage has barbed spines, elongated fingers, and long nails. He can create fire with the snap of his fiendish fingers and has used the flames to put the fear of the devil in every Vallakian.

Perhaps more disturbing than his fiendish arm and his murderous nature is Izek’s collection of dolls, which he keeps in his bedroom in the burgomaster’s mansion. Izek often has dreams of a beautiful young woman, and for years he has forced a local toymaker named Gadof Blinsky to craft dolls in her likeness. Izek doesn’t pay for the dolls but instead threatens to burn down Blinsky’s shop unless the toymaker delivers a new doll every month. Every doll is modeled on a description given to Blinsky by Izek, and each doll has been closer to capturing Ireena’s likeness than the last. The woman is Ireena Kolyana, although Izek did not know her identity until he attempted to capture her (for some unsavory purpose). At the PCs’ behest, the Burgomaster intervened, stating to Izek that he had other plans for Ireena. Izek remanded Ireena to the party’s custody, but immediately after was lured away when Rudolph Van Richten set his Saber-Toothed Tiger loose in an attempt to have the PCs escape from Vallaki. In the ensuing fracas, Izek vowed vengeance on the PCs…. especially on Leowen who blasted him with her dark powers.

Unknown to Izek and Ireena, they are brother and sister. Ireena fled after Izek was attacked by the dire wolf and became lost in the woods. She wandered for days in shock until she was found and adopted by Kolyan Indirovich in the village of Barovia. Izek covets her in an unwholesome way and won’t allow anyone or anything to come between them.

Ideal. “Fear is a powerful weapon. I use it to get what I want.”
Bond. “I am loyal to my master, Baron Vallakovich, for he brought me into his home. I owe him my life, but he isn’t family.”
Flaw. “I would do anything, kill anything, to find my sister.” 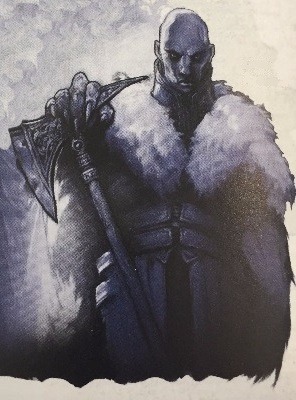