The scaly sound of desiccated flesh accompanies an air of withering decay as you stare at the decrepit, hunched form of this nearly skeletal gnome. As it turns toward you pieces of mummified skin hang tenuously from exposed bone before flaking into the air from the uncanny speed with which it moves. A horrid visage confronts you with a countenance of misery and hunger, and something that must have been a tongue at one time dances across yellow teeth and receded gums as shrunken lips begin to writhe. “Well, well. What gift have the spirits brought for me now…” it croaks, its voice as dry as glass scraping across rough stone. “Oh, my. Let me have a better look at you.” The gaze of its eyes seem to bore into your mind and peer at your soul with naked desire as it begins to grin madly..

Over 120 years ago, Marek tracked down the Arcanolabe – an artifact with the power to not only view any location or person, but also, the ability to view numerous planes and world’s simultaneously. Using the Arcanolabe, Marek studied how the planes and various realms interacted with one another, and he was fascinated how the perceptions and actions in the material planes affected those realms of spirits and elementals, and vice versa. It soon became apparent to him, that the realms and their inhabitants were connected and that mortal and deific design, rather than chaos, was the true ruler of cosmos. For over a century Marek observed, and at times nudged, the denizens of the multiverse, and for all he learned, he found only more questions.

While it was true that life’s presence commanded it’s surroundings, it was also true that some outside force or forces were capable of overriding it. The mysteries of life, death, and their role in the great cosmic play eluded Marek at every turn. Seeking an answer to these ageless questions, Marek turned the Arcanolabe to the realms of shadow. Yet, every time he tried to peer into those dark depths, he find himself back at the surface. It was as if something was pushing his presence aside and obscuring his path.

It wasn’t until he began to study places and creatures in the material plane that were connected to those fel realms that Marek made a breakthrough. While scrying on a gem of great necromantic power, he watched as a young dwarf inadvertently summoned an undead horde. Although the fiends cost the dwarf much, he was able to survive, and eventually became a great bastion of light and goodness. Marek was amazed at the ripples that this ‘Flint’ caused in the darklands, and he watched in terror as shadowy hands exacted revenge and drew the dwarf deep into their realms.

Following the bright nimbus surrounding the Dawngreeter, Marek was finally given a glimpse of the horrors that dwelled in the dark. While his view was not clear, he could see that Flint was imprisoned in an enclosed plane – a prison of malice and cruelty. Concerned for the dwarf’s very soul, Marek dared to turn his view to the surrounding planar areas. If he could understand the nature of this awful world, perhaps he could find a way to protect Flint… or even bring him back. But just as he began to shift his gaze from the Dawngreeter’s great light, a clawed hand crashed out of the Arcanolabe and mist exploded around Marek.

Beyond death’s threshold Marek was alone in the gray veil of spectral mist. 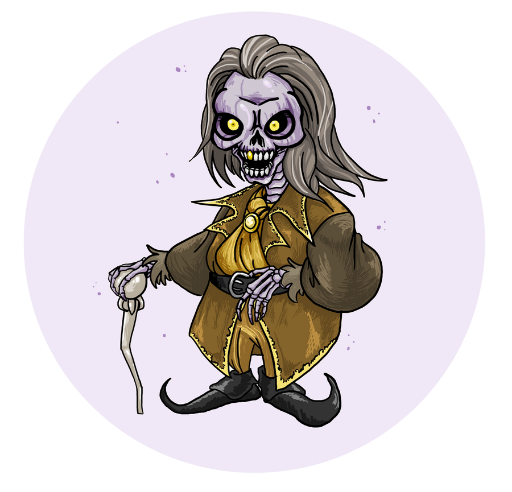