Spirits of long-dead children of the Durst family

When the characters first step into Ravenloft, the sound of a weeping child attracts their attention. Moving closer, they see two small children. The children are ten-year-old Rosavalda (“Rose”) and her seven-year-old brother, Thornboldt (“Thorn”). Thorn is weeping and clutching a stuffed doll. Rose is trying to hush the boy. This, however is an illusion created by the evil spirit of the Durst House. Tricking the characters into entering the house to find their baby brother Walter and rid the house of a monster in the basement, the characters eventually encounter the real spirits of the two deceased children.

The children died of starvation centuries ago after their insane parents locked them in the attic and forgot about them. They were too young and innocent to understand that their parents were guilty of heinous crimes. Their parents told them stories about a monster in the basement to keep the children from going down to the dungeon level. The “terrible howls” they heard were actually the screams of the cult’s victims. As part of the party’s attempts to banish the evil from Death House, the characters put the souls of the two children to rest in their ancestral tombs. 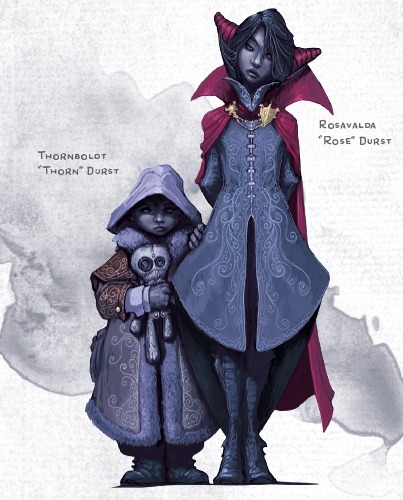