With his mind sharp and his heart dark, Strahd von Zarovich is a formidable foe. Courage and lives beyond measure have been lost to him.

I AM THE ANCIENT. I AM THE LAND. My beginnings are lost in the darkness of the past.
-Tome of Strahd

In life, Strahd von Zarovich was a count, a prince, a soldier, and a conqueror. After the death of his father, King Barov, Strahd waged long, bloody wars against his family’s enemies. He and his army cornered the last of these enemies in a remote mountain valley before slaying them all. Strahd named the valley Barovia, after his deceased father, and was so struck by its scenic beauty that he decided to settle there. Queen Ravenovia lamented the death of Barov and was fearful of Strahd. War had made him cold and arrogant. She kept her younger son, Sergei, away from the battlefield. Strahd envied the love and attention his mother visited upon his brother, so in Barovia he remained. Peace made Strahd restless, and he began to feel like his best years were behind him. Unwilling to go the way of his father, Strahd studied magic and forged a pact with the Dark Powers of the Shadowfell in return for the promise of immortality. Strahd scoured his conquered lands for wizards and artisans, brought them to the valley of Barovia, and commanded them to raise a castle to rival the magnificent fortresses of his ancestral homeland. Strahd named the castle Ravenloft, after his mother, to demonstrate his love for her. When it was complete, Strahd commanded his mother and brother to come to Barovia and stay with him. Sergei eventually took up residence at Ravenloft, but Ravenovia passed away while traveling to her namesake. In sorrowful disappointment, Strahd sealed his mother’s body in a crypt beneath the castle. Strand’s attention soon turned to Tatyana, a young Barovian woman of fine lineage and remarkable beauty. Strahd believed her to be a worthy bride, and he lavished Tatyana with gifts and attention. Despite Strahd’s efforts, she instead fell in love with the younger, warmer Sergei. Strahd’s pride prevented him from standing in the way of the young couple’s love until the day of Sergei and Tatyana’s wedding, when Strahd gazed into a mirror and realized he had been a fool. Strahd murdered Sergei and drank his blood, sealing the evil pact between Strahd and the Dark Powers. He then chased Sergei’s bride-to-be through the gardens, determined to make her accept and love him. Tatyana hurled herself off a castle balcony to escape Strahd’s pursuit, plunging to her death. Treacherous castle guards, seizing the opportunity to rid the world of Strahd forever, shot their master with arrows. But Strahd did not die. The Dark Powers honored the pact they had made. The sky went black as Strahd turned on the guards, his eyes blazing red. He had become a vampire. After slaughtering the guards, Strahd saw the faces of his father and mother in the thunderclouds, looking down upon him and judging him. He had destroyed the family bloodline and doomed all of Barovia. The castle and the valley were spirited away, locked in a demiplane surrounded on all sides by deadly fog. For Strahd and his people, there would be no escape.

Strahd has been the master of Ravenloft for centuries now. Since becoming a vampire, he has taken several consorts-none as beloved as Tatyana, but each a person of beauty. All of them he turned into vampire spawn. Although he feeds on the hapless souls of Barovia, they provide little nourishment and no comfort. From time to time, strangers from faraway lands are brought to his domain, to play the vampire’s game of cat-and-mouse. Strahd savors these moments, for though these strangers offer him no lands to conquer, they aren’t so easily destroyed and therefore provide a welcome diversion. Strahd believes that the key to his escaping Barovia lies in finding someone worthy to rule in his stead, but his arrogance are so indomitable that no one is ever good enough in his eyes. He believes in his cold heart that only a von Zarovich as great as he or his father could sway the Dark Powers to release him. 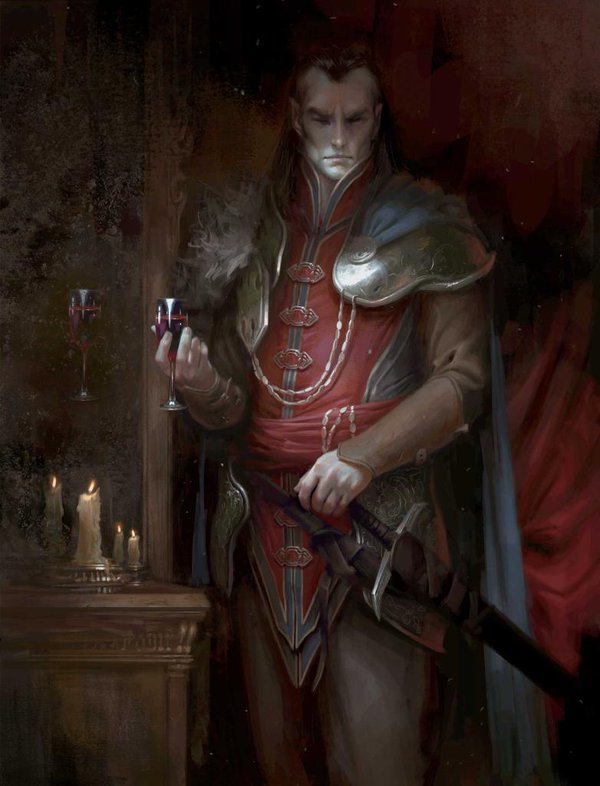