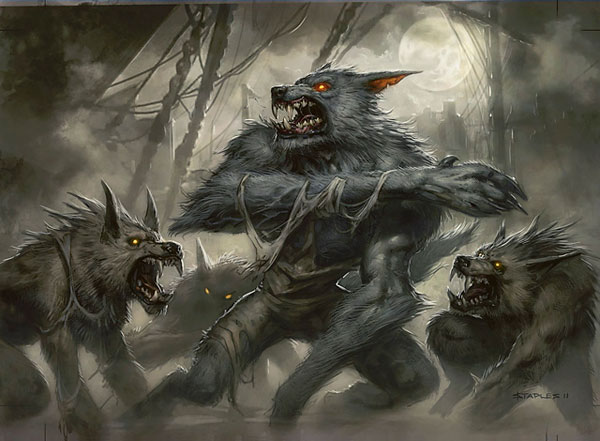 A werewolf is a savage predator. In its humanoid form, a werewolf has heightened senses, a fiery temper, and a tendency to eat rare meat. Its wolf form is a fearsome predator, but its hybrid form is more terrifying by far-a furred and well-muscled humanoid body topped by a ravening wolf’s head. A werewolf can wield weapons in hybrid form, though it prefers to tear foes apart with its powerful claws and bite.

Most werewolves flee civilized lands not long after becoming afflicted. Those that reject the curse fear what will happen if they remain among their friends and family. Those that embrace the curse fear discovery and the consequences of their murderous acts. In the wild, werewolves form packs that also include wolves and dire wolves.

One of the most ancient and feared of all curses, lycanthropy can transform the most civilized humanoid into a ravening beast. In its natural humanoid form, a creature cursed by lycanthropy appears as its normal self. Over time, however, many lycanthropes features suggestive of their animal form. In that animal form, a lycanthrope resembles a powerful version of a normal animal. On close inspection, its eyes show a faint spark of unnatural intelligence and might glow red in the dark.

Evil lycanthropes hide among normal folk, emerging in animal form at night to spread terror and bloodshed, especially under a full moon. Good lycanthropes are reclusive and uncomfortable around other civilized creatures, often living alone in wilderness areas far from villages and towns.

A humanoid creature can be afflicted with the curse of lycanthropy in one of three ways. He or she can contract the disease after being wounded by a lycanthrope (Pathological Lycanthropy), or if one or both of its parents are lycanthropes (Heritable Lycanthropy), or if they are cursed by a powerful entity (Maledictive Lycanthropy). A remove curse spell can rid an afflicted pathological or naledictive lycanthrope of the curse, but a natural born heritable lycanthrope can be freed of the curse only through death. A lycanthrope can either resist its curse or embrace it. By resisting the curse, a lycanthrope retains its normal alignment and personality while in humanoid form. It lives its life as it always has, burying deep the bestial urges raging inside it. However, when the full moon rises, the curse becomes too strong to resist, transforming the individual into its beast form – or into a horrible hybrid form that combines animal and humanoid traits. When the moon wanes, the beast within can be controlled once again. Especially if the cursed creature is unaware of its condition, it might not remember the events of its transformation, though those memories often haunt a lycanthrope as bloody dreams.

Some individuals see little point in fighting the curse and accept what they are. With time and experience, they learn to master their shapechanging ability and can assume beast form or hybrid form at will. Most lycanthropes that embrace their bestial natures succumb to bloodlust, becoming evil, opportunistic creatures that prey on the weak.

Pathologic Lycanthropy
This is the dreaded disease described in hundreds of folktales, the cursed affliction that turns an innocent victim into a ravening beast. No race or sex is immune; it is a plight to which every man, woman, and child is susceptible. Unlike true werebeasts, infected lycanthropes are not born with their affliction. Their condition more closely resembles a disease, in that it can be contracted and passed on. If the victim is very fortunate, it can even be cured, though not as any ordinary disease might be. This form of lycanthropy can be acquired through contact with the saliva, blood, or other secretion of either a true werebeast or another infected werebeast (and perhaps even that of a maledictive one).
Simply touching a werebeast or its blood will not transmit the contagion, however. Conventional wisdom is that the infective agent must be insinuated into the bloodstream of a victim through some wound. The chance of a victim succumbing to the scourge seems to be proportional to the severity of the wounds inflicted. Unlike true werebeasts, infected lycanthropes are (initially at least) unaware of their affliction. When in nonhuman aspect, they have the mentality of an animal, a ravening beast.

Maledictive Lycanthropy
“Maledictive” is the term coined to describe those unfortunate victims who suffer from lycanthropy as the result of a curse. While powerful magics such as a wish might also induce lycanthropy, such maleficent enchantments are fortunately very rare. On the other hand, a curse that somehow summons the beast within is not so uncommon that it can be ignored. Maledictive lycanthropy is a very real risk of which all residents and visitors must be aware. There are three general forms of curse, each of which may result in lycanthropy. These can cause a condition that is indistinguishable from the pathologic form of lycanthropy with one exception: the victim of such a curse may or may not be able to infect others with his contagion.